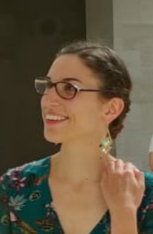 Claire Vintrou-Defaque is a clinical psychologist at the EHPAD (Etablissement d’Hébergement pour Personnes Agées Dépendantes) in the Vosges region of France. Every day, she is in contact with the themes of old age, end of life and death. This makes her a central point of reflection and accompaniment for the elderly and those around them.

A native of the Val d’Oise, she grew up not far from the landscapes that inspired Van Gogh. It was during her first year at the University of Paris XIII that she became enthusiastic about psychology. Cursus she continues on the benches of the faculty of Strasbourg. Claire Vintrou-Defaque graduated in 2016 in clinical psychology, psychopathology and psychoanalysis.

She specializes in the accompaniment of the elderly in EHPAD in the mountainous Vosges department.

Faced with the questions raised in her practice on the end of life, death and dying of the people she accompanies, the Vosges psychologist participates in several training sessions of the EMSP (Mobile Palliative Care Team) at the Deodatien Hospital of Saint Charles.

But it is during the implementation of a multidisciplinary cycle of lectures in 2019 on the themes of aging and death that she contacts Prof. Marie-Frédérique Bacqué for an intervention. The latter informed her of the existence of the current CIEM (formerly the French Society of Thanatology) and of the exciting work and colloquia that had been set up, which motivated Claire Vintrou-Defaque to become one of the founding members of the International Center for Death Studies.